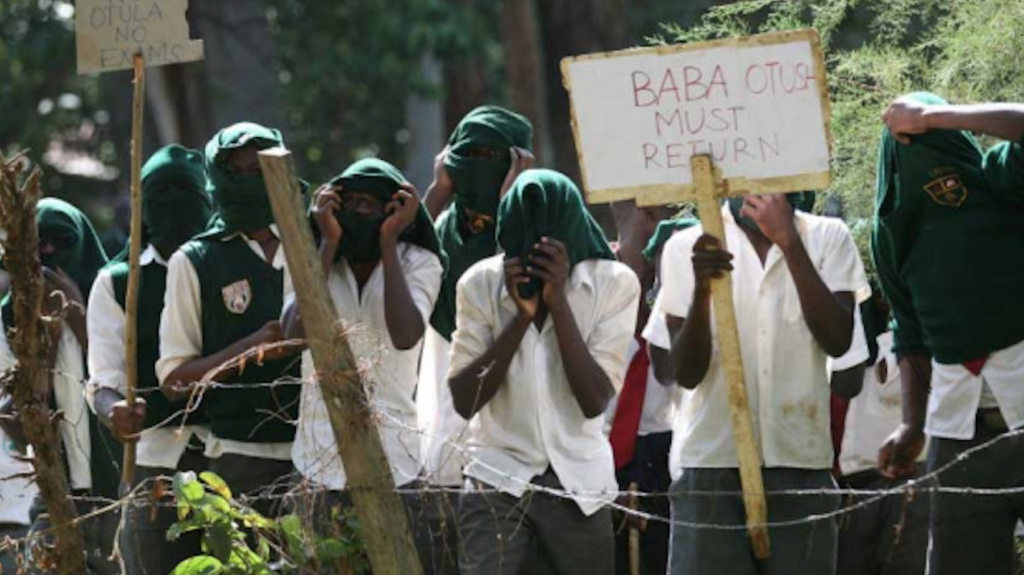 2 Shares
Share2
Tweet
Email
WhatsApp
Harrowing details of rampant cases of sexual molestation and bullying that led to the recent suspension of long-serving Maseno School Principal Paul Otula can be revealed today.
A confidential report compiled by senior Teachers Service Commission (TSC) and Ministry of Education officials reveals that sexual molestation among students at the school had reached alarming levels, with 65 per cent of learners agreeing that they were aware of the existence of the vice.
So rife were the cases of sodomy that the investigators have called for relevant government officers to take urgent action “since it was criminal in nature”.
“The issue of sexual molestation and bullying reported by students should be dealt with firmly,” the report says. Mr Otula, who has been at the school for 16 years, was sent on compulsory leave in March following allegations that he may have failed to stop sexual molestation and bullying at the school. The TSC banished him for 30 days to pave way for investigations into the allegations.
Mr Otula was replaced by Homa Bay High School Principal Andrew Buop, sparking protests from the board of management (BOM) and the old boys association. Some BOM members have since resigned, although The Saturday Standard has learnt that Education Cabinet Secretary Fred Matiang’i could be planning to replace all the members.
According to the report based on learner write-ups, some of which The Saturday Standard has seen, 65 per cent or 40 students in a class of 62 reported that sexual molestation was rife at the school. The report also shows that prefects had formed a group called karaos (cops), which meted out corporal punishment, especially after a period called “Grace Period” for Form Ones had ended. The prefects were appointed by teachers and not elected by the learners as expected, according to the report.
The school did not also have a students’ council. “The student responses indicated that the prefects were high-handed and harsh. They beat other students with belts and punished them after the night preps at 10.50pm,” the report says. The students also reported that some teachers beat them with hockey sticks and tubes. One student, in a response to the investigators’ questionnaire, said: “We need a new principal or else shule itachomwa (the school will be burnt).”
The student said he started hearing of cases of sexual molestation immediately he reported to the school. Gay students “I heard there were homosexual practices in the school and (I found) that it is true. Last year, two students were expelled for being gay and I always see it by my own eyes.” Another student is captured to have said that “I hate the fact that we are abused and mostly sexually. Its really bad.
The prefects and senior students tend to molest us sexually.” Another said “the issue of homosexuality has been in the school but if found in the act, the people (students), involved are expelled”. One other respondent said homosexuality and theft cases were rampant at the school, with little action being taken. The student accused prefects of leading the gay acts. Another student said: “Students have sex with others but teachers never take action (when told), including the principal who does not take the issue seriously.”
One student gave a harrowing account of how he sustained serious injury after a Form Four cube-mate attempted to sodomise him. “He attempted to rape me several times but he did not manage,” he said. The student said he reported the matter to the deputy principal who asked him to follow the normal reporting channels. “I did not tell the prefects because I feared as they were the same ones who punished us,” the boy said.
The report says the guardian withdrew the boy from the school on health and safety reasons. In one of the cases captured in the report, a student called on the government to abolish the Karao system of prefects. “Abolish the Karao system because it makes you feel like a prisoner, you don’t feel as if you were in a school.” “I hate the fact that the principal allows prefects to beat other students,” he said.
Many students singled out teachers saying they beat them with hockey sticks and bamboo sticks. Others spoke of how prefects beat up other students every night. One student said they were forced to do menial duties without warm clothing on chilly mornings. Another said: “Prefects often separate themselves from students and take different food from that of others and think that they are of a higher calibre than the rest of the school; we should all be treated equally”.
“Prefects beat us thoroughly using belts, canes, wires,” one student said. “The prefects of the school are given too much privileges mostly on corporal punishment, something even teachers are not supposed to do.” The report says the school was not following government rules, including those outlawing corporal punishment. The schools was also asked to engage a professional counsellor and recruit a nurse to deal with issues. Mr Otula is reported to have failed to provide convincing reasons for not stopping bullying and sexual molestation of students in contravention of the Basic Education Act. The report recommends the transfer of Mr Otula “to change the environment”.
First published by Standard Media Group
2 Shares
Share2
Tweet
Email
WhatsApp
← Kenya Should Promote the Right to Health for Sexual MinoritiesStatement on the Sexual Exploitation of Women and Minors in Donholm, Nairobi →