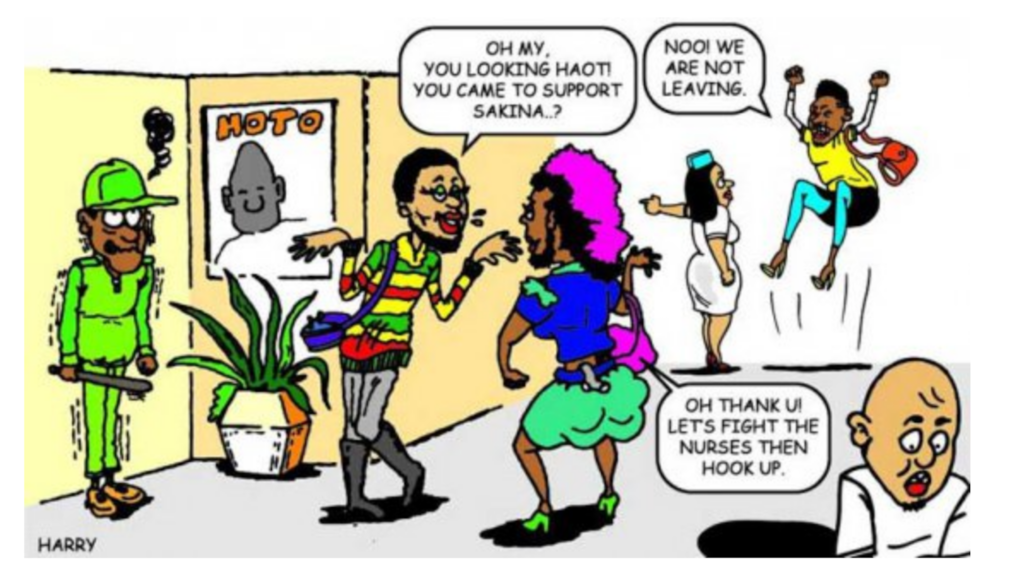 If you thought it’s only heterosexual men and women who fight in relationships over cheating, think again. A bunch of gay men caused an ugly scene, bringing activities at a community health facility in Mtwapa, Kilifi County to a standstill when they demanded to hold a night vigil at the hospital to guard one of their own.

The patient, commonly referred to as Sakina by his peers and considered the ‘woman’ in his relationship, had been rushed to the medical facility by community workers from a local non-governmental organisation after he was attacked and stubbed by his male partner on suspicion of cheating.

According to the community workers who had come to the rescue of Sakina, whose real surname was identified as Kinyanjui from Muranga County, he had been involved in a nasty fight with his partner who suspected him of having an affair behind his back with gay tourists.

Sakina’s unidentified lover is reported to have accused him of eloping with an aging Italian tourist to Malindi, where they lived for almost a month, claiming he had gone there for unspecified work.

“He never informed his boyfriend when he left him for the Italian. The boyfriend only learned about it from his peers around Mtwapa and this angered him. The duo had peacefully lived together as a couple for over a year,” one of the couple’s friends, who described Sakina as a thankless partner, told the community workers.

Sakina had no clue what was awaiting him when he returned home after parting ways with the Italian who was flying back to his country. Immediately upon his arrival, his fuming boyfriend attacked him with a barrage of questions to explain exactly what he was doing in Malindi.

“He allowed him into the house before demanding an explanation on why he had left the matrimonial home to stray with a foreigner. A heated argument ensued and degenerated into a fight before Sakina got stubbed in the chest. He screamed, attracting the attention of neighbours who came to her rescue before calling us,” a community worker who helped to rush a bleeding Sakina to hospital said.

They reportedly claimed they were afraid, following intelligence that the offending boyfriend was planning to go after him at the hospital to “finish him off”. The nurses, however, who were not amused by the gay men’s theatrics, demanded that they leave. A scene ensued after the group defied the orders and engaged the medics in a shouting mouth.

“Mwaturingia hapa na mabwana zenu hututafuta usiku na mchana. Tuko poa kuwashinda. Tunawatosheleza. (You are slighting us, yet your husbands come looking for us day and night. We are better than you. They come to us because we satisfy them!),” one of the men was heard scoffing at the nurses.

After a while, the nurses who had been outshouted pleaded with the community workers to convince the group to leave in vain.

“It is only when the hospital threatened to stop attending to Sakina who had been grievously harmed that the group agreed to leave. We are currently monitoring Sakina’s healing progress, but she is recovering quite well. In fact, her boyfriend sent a bunch of flowers and a message saying that he was willing to reconcile since he had only acted out of anger,” the community worker told Crazy Monday.