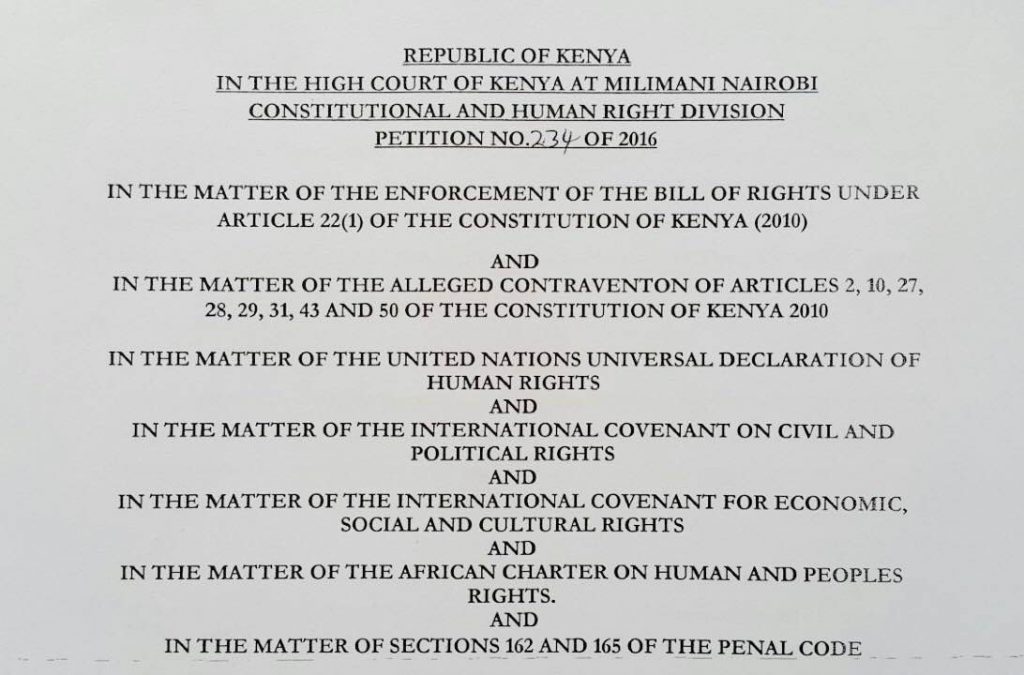 On Wednesday, June 8, five persons and three organisations, including the Gay and Lesbian Coalition in Kenya, filed a petition challenging Section 162 (a) and (c) and Section 165 of the Penal Code. These provisions criminalise ‘carnal knowledge against the order of nature’ and ‘gross indecency’ respectively and have been used in the past to criminalise adult, consensual, and private same-sex sexual conduct.
The effects of the law have been varied and have included state sponsored violence and discrimination against persons on grounds of sexual orientation, gender identity and expression, violence and discrimination by private citizens, discrimination while accessing both public and private services including health and housing, among others.

All petitioners have either experienced or witnessed violence or discrimination on grounds of their real or perceived sexual orientation. John Mathenge, a petitioner, has faced both physical and sexual violence on account of his sexual orientation whereas M. Ochieng’ and Yvonne Powers, who are transgender, have faced violence and discrimination, including sexual violence, arbitrary arrests by police, and destruction of business premises, purely on account of their imputed sexual orientation. Although the disputed provisions of the Penal Code in this case do not directly affect members of the transgender community, the experiences of Ochieng’ and Yvonne Powers show the unintended consequences of the law. Past judicial decisions have enhanced transgender rights including having names changed in official documents, a major step in achieving full recognition.

Persons who have shown support for persons facing discrimination and violence on grounds of sexual orientation, gender identity and expression also face ostracism and stigma from the larger community, as well as extortion from police officers when seeking protection on behalf of LGBQ persons. For instance, Mary Ochieng’, who is M. Ochieng’s mother, has been extorted by police on several occasions when seeking Ochieng’s release. Rev. Mark Odhiambo, a priest who works with members of LGBQ community, and a petitioner in the case, has faced stigma from members of the clergy for his support for LGBQ rights. As with the case of transgender individuals who bear the unintended consequences of the disputed laws, persons who support the rights of LGBQ persons also bear these unintended consequences.