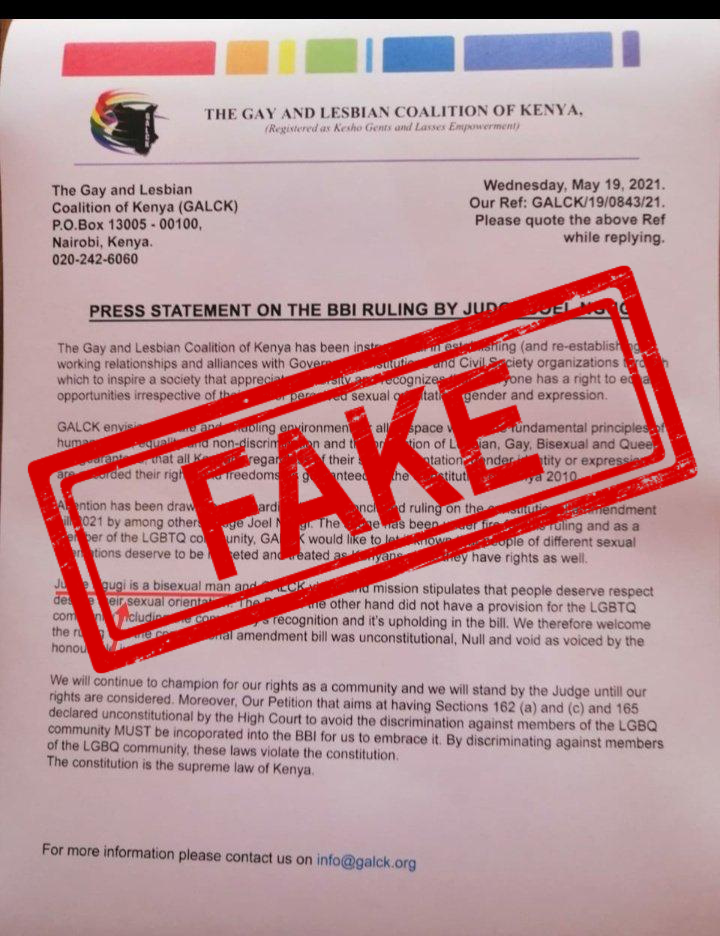 On May 19th, 2021, our attention was directed to a fake document that was released with our name attached to it. The document referred to the BBI ruling by Judge Joel Ngugi claiming that the judge was under fire for the ruling against the bill which doesn’t uphold or recognize the LGBTQ+ community. This document went further to allege that this said judge identifies as a bisexual man and that this ruling was according to GALCK’s grand plan.

First and foremost, we condemn the writer of this document as identity thieves. The Gay and Lesbian Coalition of Kenya did NOT put out a statement of any kind regarding the BBI ruling, therefore, the person or people who did this are impersonating us. This is a serious crime punishable through the Defamation Act and investigations are underway to trace where the document came from and how it was shared. Any leads can be directed to us through our email – info@galck.org.

Secondly, we denounce disclosing anyone’s sexual orientation without their consent. This is a form of violence that is continuously meted upon the LGBTIQ+ community and to suggest we would endorse such repulsive behavior is abhorrent and not to mention sinister motive. Identifying as lesbian, gay, bisexual, transgender, intersex, or queer is not a crime in Kenya. Every person has protected freedoms according to Article 33 of the Constitution. However, openly stating your sexual orientation or gender identity is a personal choice that should be respected.

Lastly, to our member organizations, partners, allies, and the Kenyan LGBTQ+ community, note that all of our statements are transparent and are not only sent directly to you but can also be verified on our website. If you still need further clarification, feel free to share all suspicious documents linked to us for verification by email (info@galck.org) or through our different social media platforms.

The Gay and Lesbian Coalition of Kenya.